New Contree: 2012 No 64
JavaScript is disabled for your browser. Some features of this site may not work without it. 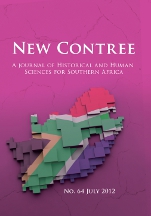 The 64th Edition of New Contree (still in the Journal's 35th birthday year) promises to provide some valued research, as multidisciplinary reflections of interest to most academic scholars. The first contribution is devoted to archaeological research. In his Intersection of archaeology, oral tradition and history in the South African interior Jan Boeyens argues that multiple points of social and cultural interaction, as well as a repository of interconnected material inclusive of oral and documentary records exist to entangle the histories of indigenous and colonial societies in South Africa. He further debates for the necessity of utilising a multi-source, comparative approach across disciplinary boundaries. To be exemplary he discusses his thinking based on three case studies from the South African interior on the Marothodi, Kaditshwene and Magoro Hill setllements.

The next stop is with Krysta Heathcote in the Orange Free State that informs the reader on the profesionalisation, development and impact of especially British accountants in yesteryears history in a region normally labelled as "Boer territory". As we remain in this territory Chitja Twala reminds the reader of the The Premier's Economic Advisory Council in the African National Congress-led government of the Free State Province of recent times. The PEAC's associations with projects to reduce inefficient service delivery and alleviate poverty are key aspects of this discussion that covers the period 1999 to 2004.

Two articles have been included that cover legal history from different angles. Erika Serfontein argues for legal research from more angles of enquiry, and accentuates the value of an integrative multidisciplinary research approach as a model for possible future perspectives on legal research. On the other hand Elmarie van der Schyff casts a critical historical reflection on the South African mineral law and assesses government's regulatory power in the exploitation of minerals.

On a trip with Karina Sevenhuysen to the local government of Port Elizabeth of the 1920s she contextualises traces of insufficient housing to black people. The reality of financial obligations to black people, not able to pay for services (due to limited skills and consequently low wages) completely overwhelmed local authorities. This was detrimental to the health of black and white workers. She also deliberates poor housing's impact on the economy and on race relations. The argument that providing more services and higher wages (in stead of less) in the long term could result in more lasting socio-economic and health-inclusive benefits, are accentuated.

Juan Klee has the last word on multinational sport participation that replaced apartheid sport in South Africa in the years 1967-1978. He considers the role of BJ Vorster and PGJ Koornhof as part of the leadership at the time. Klee further argues that the evolutionary sport policy during Vorster's term of office was as a result of nuanced changes in the thinking of the NP regarding the policy of apartheid, and not so much as a result of external and local pressures.

As a closure to all the contributions, two books are reviewed by Archie Dick. The one is titled Reading revolution: Shakespeare on Robben Island and written by Ashwin Desai – the other, T Weller's Information history in the modern world: Histories of the information age provides informative views on other aspects and fields of History.

The New Contree editorial board thank all the contributors of articles for their cooperation and hard work in making this issue possible.