TD: 2009 Volume 5 No 1
JavaScript is disabled for your browser. Some features of this site may not work without it. 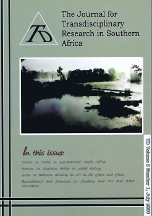 Is it not strange how important trend-setting pointers in academia, almost by chance, present themselves? At a conference of the Southern African Historical Society, with the theme of ‘Breaking boundaries, blurring borders: the changing shape and scope of southern African historical studies’, one of the papers, presented in a regular session, attracted attention and favourable comment from historians across the board.

Prof. Neil Parsons of the University of Botswana, re-visited the longstanding issue of finding a platform for southern Africa in global history. The reason for the current interest in global studies at undergraduate level in the United States of America, he explained, was that it could liberate undergraduate students from ‘big-power parochialism’, encouraging them instead to explore the connectedness of all parts of the globe.

Of particular importance was Parsons’ suggestion on how historians in southern Africa can make these links; how they can aspire to become part of this ‘bigger’ historical picture. The three cues offered in the paper have a direct bearing on the broadening, across disciplinary boundaries, of the foundations of historical discourse. He suggests that historians need to tap into the current field of genetic research in the biological sciences that locates the story of humankind in Africa. This in turn will require a more comprehensive investigation into the Early, Middle and Late Stone Age. And finally, a universalising approach must be taken in biographical studies.

We are particularly pleased to be able to publish Prof. Parsons’ paper in this edition of TD The Journal for Transdisciplinary Research in Southern Africa.

Southern African historians, it seems, have their work cut out for them. There is a need to take the natural science route to the past. From there archaeology and palaeontology, the bridging disciplines between natural and social science, need to be used to decode the complex story of humankind on a genetically diverse continent. This will link African Eve to her descendents around the globe. In the final phase of this ‘blurring of borders’ the historian must master the art of writing history as a literary story; to show how individuals have, over time, taken their place in the long chain of events that comprise the story of life on earth.

Clearly, interdisciplinary and multidisciplinary methodological strategies will have to be pursued in order to arrive at a point where historians in southern Africa will begin to share their findings with scientists in a variety of other fields in all parts of the world. ‘Transnational’ and ‘transboundary’ theories and perspectives are currently high on the research agenda at some South African universities. These are the buzzwords that bring a sparkle to the eye of many a young postgraduate historian. It is but one step further to link up to a transdisciplinary approach to historical studies.

Worldwide, the rigid boundaries that once separated disciplines have become less-circumscribed; they are no longer judged by the static conventions of yesteryear. History, as an academic discipline at South Africa universities, is only now beginning to recover from a sharp decline in under- and postgraduate student numbers, brought about by the reformulation of the South African educational landscape – a process that began in the 1990s.

A growing number of young scholars with fascinating fields of specialisation are now making valuable contributions at conferences in South Africa and overseas. They are bound to grow in number. However, that trend is subject to undergraduate teaching in History becoming more than the mere memorisation of facts. The focus should shift to the exploration of an intriguing past that is exciting and is relevant to the present. And importantly, it must inform the future. By taking hands with researchers in other fields, historians can open up a whole world of valuable knowledge.

In November 2008 members of North-West University’s Research Niche Area for the Cultural Dynamics of Water hosted the first symposium of what is scheduled to hopefully become an annual event on the calendar of water studies in southern Africa.

In the hurried pace of things at the end of the year, as a rule tempers are growing short. Time is of the essence; things need to be rounded off. The intention with this symposium is to lure participants away, if only momentarily, from the rush of things, to contemplate relevant issues of common concern. The event offers participants the opportunity to speak their minds in open discussion on the important issue of water in southern Africa.

Three articles, based on themes that came under the spotlight at the 2008 symposium, are published in this edition of TD The Journal for Transdisciplinary Research in Southern Africa. Of particular importance is the article by Dr Anthony Turton. At the time of the symposium Turton was caught up in a conflict with the management of his former institution of employment, the Council for Scientific and Industrial Research (CSIR). Because of this he was unable to present the paper he and a co-worker had prepared. His contribution in this journal provides a basic outline of the work he has been engaged in and the perspectives he has developed in recent years. Its publication here is in the interest of promoting responsible transparency in scientific research and reporting.

More information on the symposium scheduled for November 2009 can be found in a notice in this edition of TD. The theme is: ‘What water problem? Multidimensional perspectives on critical issues in the Upper Vaal Catchment’. The focus will be on some aspects of the industrial, domestic and agricultural use of water in one of the hardest working river catchments in South Africa.

Plagiarism and its aftermath

In the first issue of this journal, that of November 2005, an article was published under the title ‘Project management in Ghana: expectations, realities and barriers to use’. It formed part of the editorial material, submitted earlier in that year, for a dummy run of the journal, before its official launch.

We were recently informed that the same article, ‘Project management in Ghana: expectations, realities and barriers to use’ had appeared in Acta Commercii, 2004, Vol 4. Pp. 88-102. The authors of this, the original article, were Daniel F. Ofori and Robert Hinson. An investigation into the matter brought to light that the article submitted to TD was a blatant act of plagiarism.

We unconditionally apologise to the authors of the original article for this unfortunate incident. The plagiarised material has subsequently been removed from the electronic archive of TD.

At a time when sophisticated software technology is increasingly able to trace even the slightest unethical use of material generated by other researchers, it is necessary for authors to take note that offenders will be caught out. It is not a matter of ‘if’, but rather ‘when’.

The consequences of plagiarism are immense. The illegal use of another person’s intellectual property is a criminal act. It leads to severe punishment. Ultimately, it means that the search for true knowledge, in the written form, is reduced to a useless bunch of lies. On a personal level, plagiarism inevitably ends the career of the guilty author in an abrupt and most shameful manner.

An awareness of plagiarism and its implications is inherent in our understanding of ethics in scientific research and reporting. It is an offensive practice, the worst form of cheating, on which researchers and students should be fully informed. It inevitably ends in disgrace for the perpetrator.