New Contree: 2013 No 66
JavaScript is disabled for your browser. Some features of this site may not work without it. 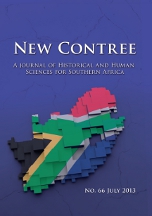 In issue 66 of New Contree the reader is exposed to an interesting variety of well-researched articles. We depart from the historically neglected (and to some extent historically disapproved) Truth and Reconciliation Commission reports. Method and limitations in the TRC’s approach to diversity are discussed by the young historian and international scholar Raphael Verbuyst. In his effort to point out how the TRC engaged with the past in a multifaceted way, he consulted several sources, and build his arguments on several existing historical and philosophical perspectives. Though not a complete historiography on the TRC-debate from a historian’s perspective and broader views (the award winning impressions of Antjie Krog in Country of My Skull for example are absent as source) the article serves to be considered as part of a debate among historians and the positioning of History in public podiums.

Anthony Minnaar takes the reader back in time to very interesting unemployment and poor relief history during the days of the Great Depression in Graaff-Reinet. If not having been aware of the timeframe in which this history takes place, one surely could have easily wrongly taken the problems of the time to perhaps be contemporary history: a history in which the poorest of the poor always appear to be the last in the queue when it comes to employment. Class and race are constructs that can hardly be ignored in a local economic debate like Minnaar’s research.

Having referred to economic issues, Mark Ingle escorts the reader from Graaff-Reinet to the broader arid Karoo region’s post-productivist economy. The dominance of agricultural production eradicated in some sense to pave way for a growing tertiary industry like tourism and recreational farming. Other interesting observations in this change, and why so this changing tide, are looked for in communications technology developments and the emergence of a highly mobile group of professionals, identified as the "creative class" which is living in the country side.

Departing slightly from direct economic matters, Christina Kgari-Masondo debates forced removals from a socio-environmental perspective. The focus is on the area of removal (namely Lady Selborne) to the place to which people had to move (namely Ga-Rankuwa). To lose a home, a history and a connectedness with what was familiar are seen a far greater loss socio-environmentally and emotionally than the actual loss of land. Kgari-Masondo also argues that the forced removal process contributed to Africans being apathetic towards the environment. It is wisely claimed that a relocated community should participate in all spheres of public decision-making locally to achieve a new sense of "home".

In what sense forced migration shares some connectedness with free migration may offer an interesting debate. However, Kalpana Hiralal views free Indian migration in KwaZulu-Natal by utilising biographical traces of Indians entering the region from the last decades of the nineteenth century to the early twentieth century. The value of adopting a biographical approach to conduct historical research in migration studies is argued, especially in the absence of official documents.

In many ways, Charl Blignaut’s unravelling of women’s socio-cultural and economic activities in the former Ossewa-Brandwag organisation, adds value to the broader historiography of women’s history in South Africa. To an extent it also confirms the blunt ignorance of the average Afrikaner-labelled woman of the time in the day-to-day politics, despite their associations with a politically motivated cultural movement like the OB. Another example of the Afrikaner cultural visibility as a protective handle to secure one’s own tradition and political future is Gustav Hendrich’s description of Afrikaners in the former Rhodesia (today’s Zimbabwe) since the mid 1930s up to 1980.

In the book review section Elizabeth van Heyningen critically reviews Karel Schoeman’s Cape lives of the eighteenth century . On the other side of the country, Barend van der Merwe appraises U de V Pienaar’s A cameo from the past: The prehistory and early history of the Kruger National Park . The work of the late Edward-John Bottomley on Armblankes (and translated by Erika de Beer from John’s MA-dissertation) is assessed by Wessel Visser. Lastly, an informative reflection is provided by Lisa Thompson on Heather Jacklin and Peter Vale’s Re-imagining the Social in South Africa: Critique theory and post-apartheid society .

The Editorial Advisory Committee decided to allow the publication of a third (special) issue of the New Contreeannually. This will provide researchers with more opportunities to publish. Please utilise this opportunity and don’t forget to subscribe as member of theNew Contree.