New Contree: 2012 No 65
JavaScript is disabled for your browser. Some features of this site may not work without it. 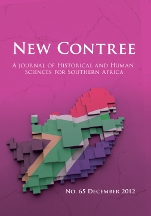 The 65th issue of New Contree literally covers topics over a wide spectrum of the historical and human sciences. The reading starts with an interdisciplinary historiographical tour on the contributions of historians in recording South Africa’s early history. De Klerk, as author of Voor 1652 – Vakhistorici se interpretasies van die vroeë Suid-Afrikaanse geskiedenis, criticises historians for not having paid more attention to critically analyse the research contributions of other historians or having cared to invest in comparative history. De Klerk suggests a refreshing repackaging of South Africa’s early history to provide new insights. Patrick Furlong in turn takes the reader on an interesting imaginative road of understanding and dealing with the white Afrikaner as the present day marginalised which in the past was mainly contended from a multicultural and transnational angle. Furlong argues that the impacts of Low Country influence in South Africa are downplayed but could be crucial in reconstructing Afrikaner identity.

In The lending practices of township micro-lenders and their impact on the low-income households in South Africa: A case study for Mamelodi Township, Polly Mashigo invites the reader into some regional economic history by introducing qualitative and quantitative research results on the micro-lending culture of low-income households in the Mamelodi Township. From economics the cast is on South Africa’s educational history from a multi-perspective angle, developed from the pen of Hermann Giliomee in Bantu Education: Destructive intervention or part reform? The reader is challenged to argue this contentious theme shrouded in perceptions, due to insufficient knowledge and a lack of openness, by also considering other points of departure. Then Hannes Haasbroek exposes the reader to a graze of gender in some political history by representing Molly Fischer’s life as wife, mother and struggle activist in the world of her famous husband and fervent Communist supporter Bram Fischer.

Two articles cover significant contemporary insights on historical research outside South Africa. Tinashe Nyamunda and co-authors provide insights on oral narratives in the socio-economic and political spaces of the diamond mining landscape in Chiadzwa, Zimbabwe. Du Pisani and Kim follow a similar research approach in The Obama factor: Responses in South Korea (2008-2009) by concentrating on media responses and community expectations. A remark by these authors that’s endorsed is that local events impact on global matters but that the significance in understanding the implications of global events only becomes of value if applied in local situations.

Contributions for the 2013 special edition of New Contree are awaited. This issue will probably appear during the second part of this year.