New Contree: 2022 No. 88
JavaScript is disabled for your browser. Some features of this site may not work without it. 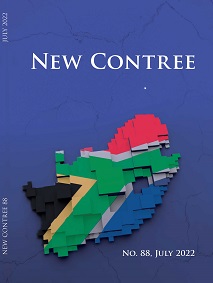 The July 2022 issue of the New Contree hosts several diverse debatable topics that range from 19th to 20th century developments. Sean Maliehe leads the conversation by discussing the “Political economy of financial inclusion in Lesotho” with particular reference to the history and development of “mobile money and the experiences of low-income and rural communities” in recent times (2012 - 2020). Maliehe argues that the changing nature of mobile money as a people-centred platform actually displays a highly unequal and exploitative system, which seemingly privileges big corporations. Maliehe came to this understanding while exploring in his research the experiences of rural communities and small Basotho agents.

In the next article a search for independence in chieftaincy leadership among the Zulu is given attention to by Siyabonga Nxumalo. It is argued that there had been some decades-long disputes between the Nzama and Ngubane chieftaincies of the 19th century in Kranskop, Umvoti. Due to a suffering under the aggression from Zulu kings a break-away from the Zulu royal family became possible because the opportunity to do so emanated since the arrival of British imperialism.

Patrick Furlong revisits, in a comparative way, Afrikaner nationalism (also called by Furlong, Christian nationalism) and Irish Nationalism during the decade leading to the Second World War. To do so, Furlong uses the thoughts of Dr DF (Daniël Malan) of the “Purified” and later “Reunited” National Party with the thoughts of Eamon de Valera and Fianna Fáil. Some similarities as criteria for Furlong’s discussion are republicanism, language, religion, neutrality, and authoritarian tendencies. It is argued that constitutionalism tempered clerical and political authoritarian influence. Some differences in these histories are also pointed out, and Furlong is critical on whether these very different histories may have too many limitations to confidently compare. Eventually some features of relatedness failed after 1948 in the advent of new histories unfolding in both countries.

Further on in time, Victor Gwande takes on a debate about the Federation of South African Trade Unions (Fosatu), and its vision during 1979 to 1985 for a “new South Africa”. Gwande argues that Fosatu should not be mainly viewed as an economic focussed union, anchored in workers’ control and workers’ democracy. He describes how Fosatu sowed seeds of participatory democracy and aspirations of the new, just and fair South Africa envisioned by icons like Desmond Tutu and Nelson Mandela. This includes accountability, women’s rights and empowerment. Fosatu’s valued groundwork laid, allowed Cosatu as Fosatu’s successor to blossom on the strength of the principles as propagated by Fosatu, says Gwande.

Hendrik Snyders introduces the reader to an interesting piece of colonial economic history, playing out in early 19th century Cape Town by focussing on the life of one British immigrant, John Owen. Owen is regarded as one of the Cape Colony’s most prominent businesspersons at the time. An entrepreneurial variety in Owen’s business activities struck the reader. He had interests in guano trading, farming, shipping, property development, auctioneering and arms trading. It is argued whether the right time (‘fortuitous circumstances’ as claimed by some contemporary newspapers) may have been the reason for Owen’s success. Wealth brought Owen some elitist status and this allowed him a significant measure of influence within the colonial administration, says Snyders. He also argues that it was rather the result of deliberate social and economic action from Owen’s side that allowed for his outstanding successful economic career in Cape Town.

Some very interesting book reviews are included in the July issue. The work reviewed are the publication of Howard Phillips on UCT’s history; Sibongiseni Mkhize’s biography on Selby Msimang; D van Zyl-Hermann’s discussion of white workers and South Africa’s long transition to majority rule as well as Hermann Giliomee’s epic work on the Afrikaners.

We encourage our readers and especially our history community to consider submitting their articles for review on the New Contree website and possible publication. See https://newcontreejournal.co.za/