TD: 2008 Volume 4 No 1
JavaScript is disabled for your browser. Some features of this site may not work without it. 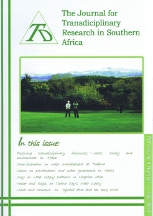 ‘Exploring transdisciplinary discourses’ – Has the Drakensberg conference measured up to its promise?

After three days of listening to papers and participating in discussions, it’s appropriate to ask whether this event met its stated objectives. To valuate this, I’d like to look first at the title, then at the subtitle of the conference.

Over the past few days we heard presentations on various approaches, techniques, and methodologies. Some of the speakers used the tools of engineers, some drew from the natural or social scientists, others relied on law and public policy, while still others were communitybased activists, reporting on their activities. Throughout the program, audience participation was lively and showed clearly that speakers effectively engaged the listeners, who for the most part—in spite of the diversity of disciplines and approaches—seemed to understand what the presenters offered.

When — to cite just a few cogent examples — an urban planner asks specific questions about water-quality-assurance testing, or when an engineer comments on the validity of survey findings, or when a law scholar responds to questions about franchised water systems, then we can say that we have achieved a healthy degree of transdisciplinary communication.

But the talk by Johann Tempelhoff and the animated conversations that followed reminded us that although the term did not appear in the title, it is above all transdisciplinary history we have been after here. And while his rich historiographical exploration gave wide berth to the extent of the discipline of history, I think that a number of the presentations strained to be included in this domain. After all, why should we expect a statistician or a media specialist or a water company executive to think and analyze like a historian? Would we expect a historian to develop a decision-support model or to conduct household surveys?

Rather, I think that the key to the sort of transdisciplinarity Professor Tempelhoff seeks is collaboration across fields and their methodologies, with each discipline listening to, respecting, informing, and enriching others. With this criterion, I believe our conference fulfilled the expectations of its title.

2. The subtitle, “Water, Society and the Environment”

To me, the goal of the subtitle was unequivocally achieved. The talks were remarkably on target, with virtually all presentations addressing some aspect of one or more of the three topics. In the ensemble, the papers and the open dialogues that ensued depicted a rich mosaic of problems, opportunities, experiments, findings, institutional responses, and significantly, a number of&nbsp; significant social changes. The subjects ranged from urban to rural issues, from historical case studies to contemporary problems, and from incipient conflicts to promising resolutions, with examples drawn from across the continent—from Nigeria to Tanzania to southern Africa. I for one, who am not an Africanist, leave here knowing that much more than when I came about the complex subject of water, society, and environment in sub-Saharan Africa.

In closing, I believe that we should all take home the message that history, in concert with other disciplines, can serve as a valuable partner for the various explorations that need to be undertaken. This line of inquiry can help shed light on and expose the roots of important water-related issues—whether those occurred a century ago or are happening now.

This interdisciplinary, expansive, and generously inclusive view of the contributions of history is entirely consistent with the purpose and approach of the International Water History Association (IWHA), the conference’s cosponsor. The Association was established to encourage, promote, and foster historical understanding of, and research in the relationship between water and humankind. And just as this conference sought to encourage discourse among a diverse group of persons interested in water, so IWHA attempts to strengthen relationship between those engaged in water history and water administrators, engineers, scientists, planners, and other practitioners.

IWHA accomplishes this mission through a network that offers a crossfertilization of ideas and experiences that help illuminate the various processes shaping water resources use, and reveal interrelated aspects or historical contingencies and precedents. And again like this conference, by recognizing that the aims and ideologies of those controlling water resources are often complex and controversial, IWHA provides a forum for the widest possible debate, free of political or institutional influence or control.

About this edition of TD and the conference

It was the idyllic setting that usually only presents itself in movies and storybooks. For a water conference it was perfect. When we arrived at the conference venue in the impressive Drakensberg Mountains on 19 April it was raining. The following morning the first snow of the winter lay on the nearby mountaintops as the motley group of participants left their cozy hotel rooms. They headed for the dining room and shortly afterwards sat in the conference hall listening to presentations. For three days they talked, about water, history, transdisciplinarity and Africa.

Considerable progress has been since the first African water history conference was presented by North-West University in December 2004. The executive of the International Water History Association (IWHA) agreed to act as one of the hosts for conference. Early in 2008 South Africa’s Water Research Commission (WRC) agreed to make a substantial contribution towards funding the event.

For the members of the Research Niche Area for the Cultural Dynamics of Water at North-West University’s Vaal Triangle Campus the event was important. Much planning had gone into arranging the conference. They wanted to make sure that people, working in the field of history-related water research in sub-Sahara Africa would get the opportunity to communicate.

Twelve of the almost 30 papers and posters presented at the conference feature in this edition of TD The Journal for Transdisciplinary Research in Southern Africa.

The editors thank the authors of the articles, based on lively conference papers. They had to work on much tighter time schedules than usual. We appreciate the effort they put in to help us bring out this publication within four months of the conference event.

A special word of thanks is also extended to the executive editors for this edition. They are: Prof. Bob Varady, of the University of Arizona and President of the IWHA, Dr Maurits Ertsen, of the Technical University Delft (TUDelft), in the Netherlands, executive member of the IWHA, and Prof. Heather Hoag, an environmental historian and member of the IWHA, specializing in African water history at the University of San Fransisco. They shared the responsibility of having overseeing the peer review process in a very short period of time. Their roles, individually and in committee, were crucial. They acted as mentors for young scholars and facilitated the important process of communication between authors and their peer reviewers, in an exemplary manner.

Thanks go too to our peer reviewers who were willing to look at articles a second and third time, to ensure that the product was satisfactory.

Most of all, we are grateful to the IWHA for assisting in the process of marketing the event; the WRC provided the valuable funding without which the event might not have been possible; and North-West University gave the infrastructure and actively supporting the initiative.