New Contree: 2016 No 77
JavaScript is disabled for your browser. Some features of this site may not work without it. 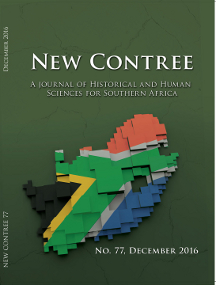 The December 2016 issue covers an interesting variety of research in which spaces and the impact of economy, race, gender, education, war, power and leadership prominently features. Wendell Moore departs with a discussion on the pioneering days of Orlando Township as Noordgesig during and shortly after the Second World War. Indeed Moore’s contribution cover an underresearched history of coloured townships in the Johannesburg area. She explores the heterogeneous categories of class and race that influenced government policies and propelled some urban township dwellers into a vaguely defined group termed “Class D coloureds”. She argues that the Coloureds, having to put up with this unique identity in many ways problematizes the grand narrative of coloured identity based largely on experiences from the Cape region.

Further south west, and still in the Gauteng Province, Vusumusi Khumalo explores Evaton’s quest for economic independence, and also, like Moore, in the Second World War years up to 1948. By means of Evaton as example, Khumalo critically argues whether the white government at the time presented a favourable political environment for Africans to be, and become, economically independent. The manipulation of socio-economic institutions by the former National Party government to develop and maintain an unequal society through policies are exposed, as well as how local traders have responded to it. With the research discussed by Hamilton Simelane the reader remains mainly in the Second World War years but are introduced to how Swazi civilians were economically affected by the war and how they responded to it. At the heart of it Simelane outlines family conflicts over remittances during the war years, and how the remittances were utilized. The positive side of remittances are deliberately overlooked to just focus on the negative and divided-becoming impact of economic remittances on family relations.

From remittances the shift is to hypocrisy in nuclear technology. Lucky E Asuelime and Anna-Mart van Wyk refresh minds on a currently contentious topic: Nuclear technology and South Africa’s positioning, especially after the Second World War years up the eighties and the role of Britain in this saga. The authors accuse Britain of a kind of insincerity in the international nonproliferation regime which has focused on developing strategies to halt the development of nuclear technology, particularly in developing regions. It is argued that the activities of the five (nuclear) superpowers (the US, Britain, Soviet Union, France and China) in the process, with their actions of assistance of other countries, undermined the efficacy of this strategy. Though the current role and actions between Russia and South Africa in this regard are critically scrutinized by media and the public in general, the research by Asuelime and Van Wyk accentuates the hypocrisy-perceived participation of the British in the Nuclear Proliferation Treaty (NPT) as far as South Africa was concerned.

As an experienced cultural archaeologist and historian Anton van Vollenhoven takes the reader through the past of three individuals exhumed from desecrated historic graves in Zeerust. Heritage legislation after 1999 allowed for stricter rules and regulations than before to determine the management of cultural heritage in South Africa, that includes the processes related to the exhumation and re-interment of human skeletal remains. Van Vollenhoven emphasises the value of historical research and legislation as context in the applying of archaeological methods on the graves and the three individuals buried. Scott Couper has the last say with his close review on historical economic disparities as well as gender and class dynamics at the revived Inanda Seminary for African girls, between 1999-2001: This after decades of disinvestment for which Bantu Education is accused for having prohibited Inanda Seminary from competing equally with other previously advantaged schools. The period of recovery, in which gender and class strongly features, is major points of discussion.

Eight book reviews are included, of which five are discussions about biographies on famous and controversial personalities in Southern Africa, and the spread are equally diverse: Winnie Madikizela-Mandela; Hendrik French Verwoerd (a revised issue); Jacob Dlamini Askari; Sylvester Mwamba Chisembele and Dirk Mudge. The rest of the book reviews promise for interesting research contributions that include: Martin Legassick’s Hidden histories of GORDONIA…, the study of Anna Barry’s Boer War diary (in Afrikaans), John Brooke’s Climate change and the course of Global History.

This issue of the New Contree truly reflects the historical richness and diversity that the Journal is, and wants to be, associated with.