Yesterday & today: 2016 No 15
JavaScript is disabled for your browser. Some features of this site may not work without it. 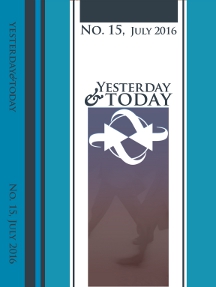 The first issue of 2016 contains a good variety of contributions: five research reports, two hands-on articles, three book reviews, news on the launching of the South African Society for History Teaching (SASHT) first formal online quiz, and a conference invitation. The themes of the articles included in this issue are:

In the first article, entitled Creating a British world: British colonial teachers and the anglicising of Afrikaner children, Cheryl le Roux introduces us to the supporting role of the British teachers to promote the British culture amongst the Afrikaner children during and in the aftermath of the Anglo Boer War. Apart from the historical context, she also includes the experiences of some of the teachers who were recruited from three of the British colonies, namely New Zealand, Canada and Australia. These experiences will provide the readers with insight into how teaching occurred, what it comprised, and how it was received by the Afrikaner children who survived the concentration camps. This article makes a valuable contribution to the history of education in South Africa.

In her contribution, Using life stories to teach about resistance to apartheid, Helen Ludlow provides the outcomes of a study of third year undergraduate history students' (who are also prospective history teachers) responses to the use of the auto/biography of an apartheid resister to teach apartheid history. Her motivation for the use of the teaching strategy was among others to get away from the lifeless narrative of apartheid legislation, and the somewhat"anonymous" political movements. She reported the significant levels of critique, commitment, empathy, enthusiasm and interest of the students in completing the tasks.

In Elize van Eeden's article on, Thoughts about the historiography of veracity or "truthfulness" in understanding and teaching History in South Africa she participated in one of the longstanding debates in historiography. She put forward the following question: To what lengths historians and educators of History in South Africa have contributed to the voices and views in research on features of fact or fiction regarding the country's past? To answer this question, she conducted document analyses of eight South African journals, and provided some guidelines to efficiently address the issue in especially FET and HET classes of History.

Two most interesting articles are those of Jared McDonald and Noor Davids.

In his article, Inclusive histories for inclusive futures: interactions and entanglements then and now, Jared McDonald argues for the production and dissemination of inclusive histories in public dialogue and spaces of history consumption. He lists the following spaces: classrooms, lecture halls, monuments and textbooks. For him, the concept inclusive histories refers to plural and multi-perspectival histories, which means the emphasising of interactions, overlapping phenomena and entanglements between various collectives at both state and sub-state levels. The purpose of his article is to argue for a national historical narrative that encourages social accord rather than social fracturing without projecting a mythical reconciliatory motif onto the past. He provides suggestions and recommendations to achieve the latter. His final argument is related to the intent of the report: to challenge and motivate those engaged in narrative history to represent the past in ways that promote plurality and multi-perspectivity in the present and for the future.

Noor David starts her article, "Making History compulsory": Politically inspired or pedagogically justifiable? with a statement about the contested nature of History as a school subject. She then explores the political context and practical implications of making History compulsory until Grade 12. The rationale for making History a compulsory subject in the FET phase was provided. She then outlines the particular process set out to achieve the goal. For her, it is important to maintain the academic and professional status of History teaching, and her research question was: What is the purpose of History teaching? Her response to the question was based on Barton and Levstik's model, the purposes of History teaching, and she indicated that the latter should be employed as a framework to evaluate the proposal, and that the emphasis should be on the improvement of the pedagogical practice and historical knowledge of the teachers instead of policy reform.

Simon Haw's article, entitled A systematic method for dealing with source-based questions is intended for those learners and teachers who still want to know more about the what and how of using source material for assessment. He provides a systematic way of how to analyse them (examination and tests) for factors such as usefulness, reliability and validity. He summarised the various factors inherent in source analysis in table form, and called it a source matrix. Two practical examples of how to use the matrix for source material analysis were also put forward.

In Jan Malan's article, Innovative ways to teach the South African youth lessons from its historical legacies, he reports on a South African Defence Force Association (SADFA) project that aims to cultivate heritage awareness among the youth of South Africa. He provides information regarding purpose, origins and mechanics of the project. The name of the project is, The Heritage Connection: Enrich your future project (HCEYFP), and the subtheme is: "Turning Swords into Ploughshares". It combines technology and ingenuity to make South African history not only educational but also entertaining to the youth.

Apart from the above contributions, included in this issue are also three interesting and worthwhile book reviews written by André Wessels (A faraway war: Angola, 1975-1989), Simphiwe Ngwane (The New Black Middle Class in South Africa) and Thembani Hlatswayo (Tales of the Old East Coast from Zuluand to the Cape). These three publications focus on three different periods in South African history.

Also included is more news about the SASHT's launch of its first formal online quiz. The focus for this year's questions was Resistance in South Africa during 1948 – 1964. The official invitation to the 30th Annual Conference of the SASHT can also be found in this issue. The 2016 conference will take place from Thursday 6 October to Friday 7 October at the Nelson Mandela Metropolitan University in Port Elizabeth. The topic of the conference is: Understandings of "decolonising" curricula and history teaching.