New Contree: 2015 No 72
JavaScript is disabled for your browser. Some features of this site may not work without it. 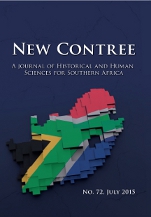 It is with mixed feelings that we present the July 2015 issue of New Contree. Apart from the variety of articles and book reviews that definitely holds promise to expose very interesting research, we are also with this issue giving tribute to an extraordinary scholar of History. Professor Robert Shell (just Rob in our circles) passed away in early February this year. As he was a member of the New Contree editorial panel for more than 15 years it is with a sense of emotional memories and an abundance of pride that we present to you two obituaries as memories from colleague Ken Hughes as well as his sole companion Sandy. We will also miss his article reviews and productive input to ensure that the New Contree progresses further to be the quality journal we envision it to be. As co-editorial committee members we hereby salute the life and milestone contributions of Rob Shell.

The first article by Hamilton Simelane on The colonial experience, indigenous leaders and the capitalization of the Swazi monarchy covers a poorly investigated topic. Simelane accentuates the capitalized features of the monarchy as it also eventually negatively impacted on the country's citizens and the country's cultural, ethical and traditional values. An abuse of monarchical power within the capitalistic economic system seems, according to Simelane, to lead to inequalities in Swaziland. Any intentions of a healthy approach to economic development currently fail the monarchy and the country per se.

John Makgala and Phenyo Thebe take the reader on an interesting and decades-long historiographical road regarding scholarship on African time for Africans in 'There is no hurry in Botswana': Scholarship and stereotypes on 'African time' syndrome in Botswana, 1895-2011. Africans do not care to be punctual it is said, and so the impact on any structured governing system is devastating as it impacts on any performance that is required to build a community and a country. Again it appears to be a colonial way of doing versus traditional African attitudes as well as an expression of political power by traditional and national political leaders. The only way to make sense of it by both the nation and the leaders will have to be to consider it against the democratic principles the country has adopted. If coming late does not serve community or the country we are perhaps on the road to something more acceptable in diverse communities than just perhaps to be endured as tolerable.

Kobus du Pisani and Yolandé Alberts cover research on "another way of doing" that spilled over from other countries to South Africa in the 1960s. That was the hippy movement. In Psigedelies en groen: Die invloed van Stephen Gaskin en sy hippiebeweging op omgewingsdenke in die VSA the authors argue that this movement's underlying philosophy and practical lifestyle have allowed for significant contributions to the local and worldwide environmental movement that can still be observed in contemporary society. Hermann Giliomee in Mandela and the last Afrikaner leaders: A shift in power relations reminds the reader that South Africa's past political history (will) remains a space to be revisited to ensure reinterpretations, diverse reflections and critical debates. Giliomee argues that a strong tendency exists "to present the Afrikaner leadership from Hendrik Verwoerd to PW Botha as being so beholden to the apartheid ideology and so intransigent that they missed all opportunities to negotiate a more balanced political settlement". So Giliomee exposes the reader to the informal attempts of leadership on both the NP and ANC side to initiate talks about an alternative to white supremacy. Giliomee also remarks that Nelson Mandela in the literature represents almost the complete opposite to that of the NP leaders, namely a leader "strongly committed to a non-racial democracy and a market-oriented economy". Giliomee embarks on a reassessment of Nelson Mandela's career and he noted that a reassessment of Mandela probably only just begun.

In Herman van der Elst's Collective foreign aid and development prospects for sub-Saharan Africa the remaining underdevelopment since the end of the Second World War's (1945) Cold War in 1991 in the states of sub-Saharan Africa is historically and politically reviewed. Channelling billions of bilateral and multilateral foreign aid into the region, and motivated by a process of decolonisation, also further expanded by decision-making covering several other initiatives. Amongst others, the United Nation's (UN) eight Millennium Development Goals (MDGs) of 2000 as foreign aid effort are mentioned and critically reviewed. Ways to stimulate development in sub-Saharan Africa in the years to come are considered.

The book reviews in this issue prepared for by New Contree's two book review editors, and worth noting, are i) Keith Breckenridge's Biometric state: The global politics of identification and surveillance in South Africa, 1850 to the present; ii) the publication of Glenn Moss on The new radicals: A generational memoir of the 1970s iii) The concentration camps of the Anglo Boer War: A social history by Elizabeth van Heyningen and Ethnicity and empire in Kenya: Loyalty and martial race among the Kamba, c 1800 to the present by Myles Osborne.