Yesterday & today: 2015 No 13
JavaScript is disabled for your browser. Some features of this site may not work without it. 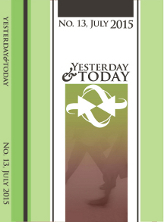 In this mid-year issue of Yesterday & Today (2015) articles on a diversity of topics are published. The scientific research section contains topics such as moral judgments in the history classroom, history curriculum reforms in England (from which South Africa can learn valuable lessons), the cell phone as a teaching and learning tool in the history classroom, and the challenges and prospects facing History education in Lesotho. The two articles in the hands-on section refer to the importance of the implementation of various thinking maps as a teaching and learning resource in the history classroom, followed by a first person narrative of a teacher's experience in creating an environment in which learners can foster their own historical gaze in the multicultural South African context.

In the first scientific research article entitled, Moral judgments in the History classroom: Thoughts of selected novice history teachers, Marshall Maposa argues that history is burdened with contentious issues which challenge the history teacher to make moral judgments in terms of historical issues that they (the teacher and learners) engage with. By means of a small scale qualitative study using narrative enquiry as a data-gathering method, he investigates the thoughts of novice teachers on the making of moral judgments about the past. Drawing on Wineburg's moral ambiguity framework, Maposa elucidates the teachers' views after they had been given the opportunity to identify certain historical themes that they have considered making moral judgments about. The findings of this article revealed that all the participants in the research project agreed that they had made moral judgments while teaching particular topics. Maposa concludes that history teachers need an applicable framework that they can rely on when making moral judgements in their teaching of contentious issues.

Kirsten Kukard in her article entited, Content choice: A survey of history curriculum content in England since 1944. A relevant backdrop for South Africa reviews the circular patterns of history curriculum content over time in terms of the what and how history should be taught to learners between the ages of 11 and 14 years. She discusses the divide that existed between those who advocated for more world history versus those in favour of more British history, and the tension between the supporters of content-led pedagogy and those who are in favour of a more skills-led approach. In the end, she concludes that these developments had particular relevance for the national and history curricula reforms that took place in England from 2011 to 2014 as it was generally concluded that learners should be exposed to a healthy balance of both world and British history and not be taught to be narrowminded in their patriotism. The procedural knowledge of history should also be taught alongside the substantive content. Kukard finalises her article with possible lessons for South Africa from the British history curriculum reform experiences, especially in a time that the Department of Basic Education is considering the notion of making History a compulsory subject for the National Senior Certificate.

In the first hands-on article entitled, Teaching and learning History through Thinking Maps, Marj Brown and Charles Dugmore share their personal experiences by offering inspiring possibilities on how thinking maps can be utilized as teaching and learning tools in the history classroom. Each of the thinking maps represents a different cognitive skill that can be used to prepare learners for essay writing, completing of short class tasks and the summarising or understanding of concepts, political stands, cause and effect, the flow of events and to compare and contrast. The authors concluded by suggesting that if history teachers expect from their learners to broaden their critical thinking skills and enhance their creativity in terms of their own writing and cognitive processes, they should be allowed to follow a flexible and eclectic approach in the designing of their own thinking maps.

In her article, Race, power and me: My position as a History educator in relation to the position of learners, Denise Gray argues that the history teacher has an important role to create an environment in which learners' historical gaze can be fostered. A precondition for this is, according to her, to develop a relationship between the teacher, learners and environment that facilitates its development. She admits that the development of the relationship might be complicated by structural inequalities in the South African context which may hamper the way learners accept that they can develop an own historical gaze. Through a personal, first-person narrative, she constructs significant turning points in her journey as educator forcing her to think differently about human rights. She concludes her article by challenging teachers to make space for personal openness and reflection in assisting their learners to develop their own understanding and appreciation of history.

Apart from the above scholarly and hands-on contributions, included in this issue are also three interesting and thought-provoking book reviews. Finally, important information regarding two upcoming events are provided: the December 2015 special edition of Yesterday & Today and the annual SASHT conference to be held in October in Polokwane.