New Contree: 2014 No 69
JavaScript is disabled for your browser. Some features of this site may not work without it. 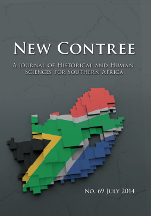 Slavery as phenomenon, the Cape Colony as region and religious leadership, with some connections between all, seem to dominate in this issue of the New Contree. Also noticeable is the historical-related contributions from disciplinary experts in economy and religion. The edition departs with "We are free, you are slaves. Come on, let's run away": Escape from Constantia, 1712 in which 23 slaves and exiles planned their unsuccessful risky escape to achieve liberty. As there are so many well recorded accounts of slavery in South Africa, the author expresses this historical event as an oversight in slavery history which deserves recording as it accentuates slave captives' desire to also be free people.

In The marriage patterns of European settlers at the Cape, 1652-1910 the authors assert that the Cape Colony may be of the most well documented settler populations in the world. Together with some progress made in digitising data regarding the South African Genealogical Registers, it became possible to study in more depth, amongst others, the settler marriage patterns from European settlement to unification in 1910. The value of marriage patterns is argued against the background of the present-day impact of womens' agency in Europe as a key determinant of the rise of a market society. Though no direct relatedness of marriage patterns in the former Cape of Good Hope with that of erstwhile European marriage patterns were identified, the authors efficiently engage with statistical results in past literature to determine whether these are reliable in a modern-day context.

In Shembe and the Early Zionists: a reappraisal is made of Isaiah Shembe's pioneering role in the founding of the IBandla lamaNazaretha (Nazarites) church in 1913. The author criticises both the believers of Isaiah Shembe (namely that they saw him as a prophet) and the academics (who developed Shembe's religious ideas in an autochthonous way). Within the Christian religion an article, titled A historical perspective on chaplain wives in the South African military context provides an extensive review of the traditional, but indispensable, gender role displayed by the spouses of Permanent Force chaplains rooted in a typical patriarchal system in which women took a subordinate position.

To further follow, is a debate on the pioneering political role of Ahmet Ataullah Beg in South Africa as first Muslim in this capacity during the last quarter of the nineteenth century. The focus of his political endeavours was concluded in the Cape Colony though Ataullah Beg also served as a Turkish emissary for the Ottoman State in the last part of the 19th-early 20th century. In the last article of this edition, a deliberation is made on A Decolonial 'African mode of self-writing': The case of Chinua Achebe in Things Fall Apart. The author explores Chinua Achebe's Afrocentric literary vision as a response to colonialist imagination of Africa. The discussion mainly revolves around making sense of Chinua Achebe's own decolonial mentality in defending Africa as a continent that has a wealth of history and humanity.

No less than four very interesting and well-reflected book reviews are also included, namely: Toby Green's 2011 publication on In the rise of the Trans-Atlantic Slave trade in Western Africa, 1300-1589; followed by a multiauthored work, published in 2013 and co-edited by Andrew and Leslie J Bank, titled Inside African anthropology: Monica Wilson and her interpreters. An evergreen interest in the history of the South African War/Anglo Boer War of 1899-1902 led to the production of yet another book, made public in 2013 and titled Angels of mercy: Foreign women in the Anglo-Boer War (by Chris Schoeman). The last book a reviewed, and also published in 2013, is that of the Robert Shell - a guru in the history of slavery - especially in South Africa. In From Diaspora to Diorama. The Old Slave Lodge in Cape Town an unconventional review is done by means of a CD and booklet. This is a way (and challenge, but equally a valuable asset) that will probably surface more in future.

All historians, researchers from other disciplines and institutions interested in publishing or/and reading about the historical foundations or events in History and various other disciplines, as well as all members of community interested in receiving the New Contree, must please subscribe as member. Information on membership enquiry can be found on the front pages of this edition and on the membership subscription form at the back of this edition. The Editorial team are looking forward to receive your article contributions for peer reviewing. We also hope to inform all on a newly developed website for New Contree (currently in progress) by the December 2014 issue.