New Contree: 2021 No. 87
JavaScript is disabled for your browser. Some features of this site may not work without it. 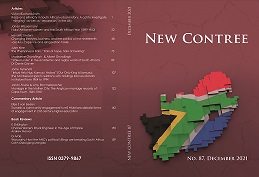 It’s hardly believable that humankind is nearly approaching its third year of the global Covid 19 pandemic. All seemingly became used to operate more remotely and perhaps travel less while daily tasks continue, and all requirements to meet remained unchanged or became even more challenging. It’s in this context that the researcher of History is thought of and appreciated for their continuous support and contributions to the New Contree. The New Contree Editorial team is also excited to share with you the research content of the December 2021 issue in which some authors critically debate, while others critically analyse historical narratives in various fields of the discipline. The recent regional history studies webinar focussing on community engagement and history in Higher Education and Training environments of the future is covered in a commentary article, with hopes to further instil debate on this possible new “turn” for the discipline in South Africa and in the rest of the continent.

As far as the December 2021 issue is concerned, Vivian Bickford-Smith kicks off with an interesting discussion on Race and ethnicity in South African urban history: a call to investigate ‘mingling’ as well as ‘separation’ in the city. More methodical attention to the extent and nature of racial, ethnic and cultural mingling in South African cities (and beyond) is the plea of Bickford-Smith. He points out the lack of research on convivial, co-operative and creative kind of mingling since the implementation of forms of segregation from the late nineteenth century onwards. To be able to do so the concepts that co-embrace the term mingling should first be critically understood within their historical context. Bickford-Smith exemplifies this concept through a case study history of late colonial-era Cape Town. He shows out how the mingling – of people, ideas and cultures – threatened the ideology of racial and ethnic purity on which the establishment of apartheid was based.

In Natal Afrikaner women and the South African War (1899-1902), Johan Wassermann draws on a variety of unique experiences by Natal Afrikaner women (as British subjects) who viewed themselves as related by blood and culture to the Boers of the Republics of the Transvaal and the Orange Free State. Their experience of the South African War, unfolding, is analysed. Difficult relationships and hardships are investigated. However, Wassermann observes out that the Natal Afrikaner women were not archetypical “volksmoeders” [mothers of the people] because they did not share the tradition of militarised citizenship, as embodied by the Boer Republics. Hendrik Snyders in Changing lifestyles, business, and the politics of the nineteenth-century Cape ice and refrigeration trade covers the 60 years prior to the South African War in Cape Town. He views the topic as a neglected aspect of South Africa’s water history. Snyders discusses the initial woes and later successes in ice trade (frozen water trade) by expatriate American and British citizen-businessmen. This history, to a large extent, features the same development path of its overseas counterparts.

A horse of a different colour is the research topic discussed by Juan Klee. In The Phelophepa train, “train of hope, train of healing”, Klee elaborates on the history of the Phelophepa Health Care Train. It is a train creatively initiated by Transnet to provide primary health care services in many rural areas of South Africa. For medical and para-medical students this service-learning opportunity with and in communities provide valued practical experience.

Craven was not only influential as a leader in his day but also an outstanding player of rugby. They argue that his academic exposure to “volkekunde” (anthropology and some ethnology) heightened for instance his understanding of the role of New Zealand’s (NZ’s) Māori as part of NZ’s rugby culture. As a result, some insights spilled over into his attempts to bring coloured South African players closer to the mainstream of rugby in South Africa. The authors debate that Craven’s reference to the “spirit” or “soul” of rugby, might have been partially informed by anthropological principles.

Johan Fourie and Amy Rommelspacher rightly contend that marriage as a social institution permeating almost all societies, is studied across the social sciences. Looking then at marriages from an economic-historical lens in Marriage in the Mother City: Anglican marriage records of Cape Town, 1865- 1960, Fourie and Rommelspacher emphasise marriage trends in the South African past. The authors used a dataset of more than 55 000 marriages between the years 1865 and 1960 on couples solemnised in the Anglican church of Cape Town. Though the economical part of the study appears more clear-cut to the authors they declare the challenges they experienced to write about ordinary people in history. Simply because of the reality that the histories of many people pose silences due to a lack of thoughts, actions, traces and proper records, the authors decided to apply more writing freedom by reading snippets of histories identified in archives “against the grain”. By using some newly discovered sources, Fourie and Rommelspacher were able to affirm that interracial marriages were a taboo in Cape Town even before the 1948-apartheid years.

To conclude the issue, Andy Manson provides a very deepening book review by Kevin Shillington on Charles Warren: Royal Engineer in the Age of Empire (2021). A still contentious topic of War party: How the ANC’s political killings are breaking South Africa is critically addressed by Greg Arde and reviewed by Collin Olebogeng Mongale.