New Contree: 2017 No 79
JavaScript is disabled for your browser. Some features of this site may not work without it. 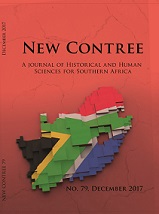 A striking, and warmly welcomed feature of the December 2017 New Contree issue is the contributions of young academics of which some has recently completed a post graduate degree. Literally half of the issue contributions covers environmental related histories. In The founding of the Marloth Nature Reserve: A historic example of collaborative conservation Izette Bredenkamp of the University of the Free State elaborates on the features of collaborative conservation since the 1970’s in which authoritative bodies and ordinary citizens participated (and called citizen science in some academic circles). Bredenkamp in her article accentuates that the Marloth Nature Reserve in the southern Cape, and established in 1928, is a historic example of collaborative conservation. The name of Aletta Tomlinson is synonym with this Reserve as she has succeeded in procuring the foothills as part of the reserve and has assisted in securing its indigenous flora as part of the Cape Floristic World Heritage Site.

Another nature reserve that features in this issue is the world-known Kruger National Park (KNP), established two years earlier than Marloth. Lani van Vuuren of the Water Research Commission in Adapting to survive – Water management and aquatic science in the Kruger National Park uncovers a decade-long challenge of the Park to ensure enough water. Despite the reality that the Park is fed by five, historically perennial, river systems, its location at the downstream end of these systems has left the park vulnerable to external influences. The article provides a historical overview on the KNP Rivers Research Programme and its role in the development of aquatic science in South Africa. As in the history of the Marloth Nature Reserve the KNP Rivers Research Programme reflects a prominent collaborative and multidisciplinary aquatic approach to research which was conducted in three phases between 1988 and 1999. The influence of this programme on changes in water management in the KNP and broader is explored.

The contribution of Danica Liebenberg and fellow authors changes the environmental topic from reserves to animals and health. In A historical perspective on the prevalence, distribution and influence of African horse sickness in Namibia African horse sickness (AHS), as endemic to sub-Saharan Africa over the past 200 years during rainy seasons is discussed. AHS is regarded as a dreadful disease which time and again has caused losses of great economic and emotional value for as long as horses have been on the African continent. Features of underreporting of AHS in Namibia, and the impact of the illness during several military events are outlined.

Tariro Kamuti of the University of the Free State in The changing geography of wildlife conservation: Perspectives on private game farming in contemporary KwaZulu-Natal Province, South Africa reminds the reader that wildlife ranching on privately owned land in South Africa has been fuelled mainly by land use changes in the agricultural sector. This happened over several decades. Kamuti attempts to explain the contradictions and continuities in the governance of private wildlife ranching in South Africa, with a focus on the province of KwaZulu-Natal. The transformation in the agricultural and wildlife conservation sectors that helped shape rural development in South Africa is a major point of focus. Kamuti is of the opinion that the gradual and systematic alienation of the African population from land and its associated natural resources during unjust systems like the colonial conquest, apartheid and forced removals, had a detrimental impact on traditional economic and environmental management systems. It is felt that current management systems still reflect the traditional order.

In the remainder of this issue of New Contree the emphasis of discussions turn to a variety of events during South Africa’s years of colonial Apartheid and earlier. In The decline in mine migrancy and increase in informal labour migration from northern Malawi to South Africa, 1970s-1980s by Harvey Chidoba Banda of the University of the Witwatersrand the Malawi labour migration on gold and diamond mines since the 1870’s is touched on, but only two decades in the late twentieth century explicitly pointed out. The detrimental role of the Witwatersrand Native Labour Association (WNLA) to orchestrate formal migrancy is discussed, followed by the role of The Employment Bureau of Africa (TEBA) until it finally collapsed in the 1980s. As motivation for this collapse, the 1974 plane crash incident and the 1987 HIV wrangle between Malawi and South Africa are discussed.

In the past issues of New Contree Bantu Education has prominently featured. Most of the times it had been done from a multiperspective stand. Nadine Moore of the University of Pretoria continues this protocol in Segregated schools of thought: The Bantu Education Act (1953) revisited. The revisiting entailed a refreshed view on Bantu Education historiography as a way to critically review the currently contested interpretation of its legacy. Moore’s findings, amongst others, indicate that academics are in disagreement as far as it concerns the 1953 Act’s impact on educational life for black scholars.She interestingly distinguishes between the perspectives of “traditionalists” and the Marxist School of thought by critically weighing them up against the rationales located in sources like parliamentary debates and contemporary newspaper articles. An aim for this study has been to engage in the pursuit of reliable knowledge pertaining to the institution of the Bantu Education Act of 1953.

Emile C Coetzee of the NWU-Mafikeng Campus totally diverts the research attention to a military narrative during the time of the First World War (1914-1918). In A tale of two graves: A biography of Lance Corporal Wijnand “Victor” Hamman, 1893-1917 the reader is cynically informed that the reason for Hamman’s prominence and peculiarity is that he is known to have two graves (one in France and one in South Africa) but has been buried in only one of the two. Hamman died on 12 April 1917 in France. Coetzee’s research could not satisfactorily unlock t(his) curiosity, accept that both graves still bare testimony of a historical silence which up to now even was not known to the Lichtenburghers as hometown of Lance Corporal Hamman.

The life and contributions of Reverend JD Kestell as field chaplain 1899-1902 (written in Afrikaans and titled “JD Kestell as veldprediker 1899-1902”) by Piet Strauss of the Free State acknowledges the dedication of a well-known minister of religion in the Dutch Reformed Church during the South African War time. Through various actions and an exemplary lifestyle, he earned himself the nickname of “Father Kestell”. Although he supported the actions of the Republic of the Orange Free State and the Zuid-Afrikaansche Republic during this War, he declined to fight or to take up a military rank. He, instead, is known to have focussed on ways to spiritually strengthen the soldier’s faith in God. He also acted as a medical assistant to both sides of the War. In this article Strauss zooms in on Kestell’s action, his emotional conflicts, his relations with President MT Steyn and his friendship with General CR de Wet. He seems to have attracted those in need.

To round off the contributions on war and particular personalities Anne Samson of the Great War in Africa Association challenges the reader to a Review Article on War and the formation of Afrikaner nationalism. The published works by different authors on Dr DF Malan, General JC Smuts and Dr HF Verwoerd, are contemplated. This discussion leads other book reviews devoted to General Smuts’s life, a reflection on opposition leadership in government; Cape-Netherland relations in precolonial times; dark spirituality practices among the Afrikaner in early times and lastly a critical review of the 2016 published work on the Herero revolt of 1904 to 1907. Enough variety and thought in one issue that amongst others accentuates that the impact of South Africa’s colonial past and the consequences thereof will for many decades to come be an emphasis in research, hardly to be avoidable or missed.

Certainly also to be missed and a loss to especially the historical community is the passing away of Professor Phil Bonner of the University of the Witwatersrand. In an obituary devoted to Phil Emile Coetzee shares his personal memories of a remarkable historian who’s legacy will live on.