New Contree: 2016 No 75
JavaScript is disabled for your browser. Some features of this site may not work without it. 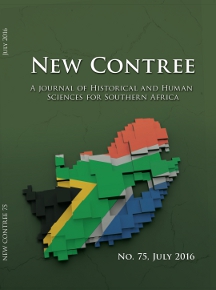 This issue of New Contree strongly features political-related topics coming from especially the authorship of historians, political scientists and experts in public management. More so it has been done in a combined editorial effort involving a historian (Van Eeden) and political scientist (Dr Herman van der Elst). In his article on South African Liberal thinking on questions of nationalism reconsidered historian Chris Saunders revisits past and recent criticism on liberal historiography. To accentuate the possibility of misinterpretations on liberalism and liberalist Saunders explored the contributions by liberals on "nation" in relation to nationalism and racism in order to capture liberal thoughts on what a non-racial South African might look like.

Phuthego Molosiwa and John van Breda in their contributions on respectively the Bakgomong: The Babirwa's Pastoralist Identity and Social Change in Late 19th Century Botswana and the Contributions of Reverend Johannes Jacobus Ulster to the development of the Moravian Mission Station, Elim, 1965 - 1974 turn the reader slightly to other genres of socio-cultural and regional-related historical writing. Effort is made by Molosiwa to point out the intersection between identity production and transformations in the indigenous herding systems of the Babirwa in precolonial Botswana. Van Breda in turn engages in an ode to the local and national value of the leadership of Reverend Ulster. His ways towards instilling initiatives as part of creating township stability and wellbeing in Elim surely should be an example for even present-day leadership in local governments.

The article focus in the rest of this issue then returns to political and local governmental topics. Most provide insight into important research reflections that flowed from the South African Association for Political Science's (SAAPS) UFS/NWU regional conference that was held on 1 October 2015 (hosted on the Vaal Triangle campus of the NWU) and titled Trends in global political development and constitutionalism.

In his article An update on South Africa's political risk profile in 2015/6, Theo Neethling provides a historical to contemporary political economic analysis of South Africa's risk profile. This contribution is structured around a comparative risk analysis with the 1990s and mid-2000s and revolves around the following question: do current political, economic and social conditions in South Africa pose a greater risk for potential investment than during the 1990s to mid-2000s? In this regard the author pleads for a fresh assessment of relevant political and economic development indicators or variables in the South African context. In the final analysis the article attempts to revisit and analyse current political and economic risks in South Africa on the basis of a selected set of indicators or variables that are commonly and internationally used in risk analysis frameworks.

The article Constitutionalism and coloniality: a case of colonialism continued or the best of both worlds? by Pieter Heydenrych further complements the views by Van Riet by questioning the universal acceptance of Western developmental thought in developing states. A specific emphasis is placed on the shortcomings of the objectives and implementation of constitutionalism in non-Western environments. It is argued that constitutions are products of Western development thought and focus on structural development rather than substantive issues. The author terms this trend "continued colonisation" (in historical terms it can be viewed as post-colonial or post modernity). In "continued colonisation" the trend seems to focus on structural correctness instead of the wellbeing of populations. This applies specifically to developing states such as South Africa. In this regard the author argues that the concept modernity must be redefined. The plea is for reconsidering rigid Western identity and meaning towards what people really need (so-called transformative constitutionalism). The suggestion is that a constitution should be adapted towards addressing the needs of the populations within non-Western environments. Heydenrych's discussion is narrowed down to the South African context where the concepts of progressive constitutionalism and Ubuntu are used to facilitate change.

Wynand Greffrath's and Gerrit van der Waldt's article on Section 139 interventions in South African local government, 1994-2015 analyses past interventions, and tries to point out the reality of applying the existing model constitution to ensure best practice in local governments. It is argued by the authors that national and provincial government interventions in the local sphere of government can be seen, within the broader context of state dysfunction, to constitute a novel and discernible phenomenon, namely "interventionism". Furthermore, the theoretical body of knowledge related to the phenomenon of state dysfunction suggests that issues of poor service delivery and "bad" governance are not exclusively at play in interventionism. The authors feel that hidden political factors that are indicative of state dysfunction may also serve as reasons to intervene in municipalities in order to influence the balance of political power in a given province, municipality, or within a party itself. Lastly, Marina Malgaes explores a different political topic away from South Africa, namely the multi-dimensional and complex relationship between the African Union (AU) and the United Nations Security Council (UN). In her article The challenges of an engagement between the African Union and the United Nations Security Council an emphasis is placed on the importance of instruments of conflict resolution and African representation on the UN Security Council. Africa's cooperative engagement with the UN Security Council is, however, complicated by a lack of economic and military capacity of individual states, the absence of advanced regional integration strategies and the strained political relations between the African Union (AU) and the Peace and Security Council of the UN. The article encapsulates a discussion and suggestions on how these problems can be overcome in order to enhance successful engagement between the African continent and the UN Security Council.