New Contree: 2015 No 74
JavaScript is disabled for your browser. Some features of this site may not work without it. 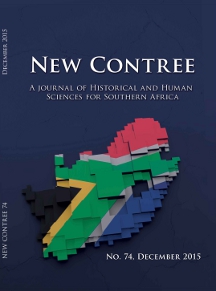 Of the New Contree published in December 2015, it could be said that the two golden threads of the research articles included are interpretations and expressions of nationalism, as well as some economic histories of regions inclusive of recent historiographical directions in regional history.

As far as the topic nationalism as thread is concerned, a departure is made with Patrick Furlong's well debated Family ties? Afrikaner nationalism, pan-Netherlandic nationalism and neo-Calvinist Christian nationalism. Comparisons are made with regard to the possible influences of these nationalisms on Afrikaner nationalism, which eventually seems not to fully resemble any of the internationally-rooted versions, but to rather have adopted a unique character. As part of the "volk's or people's nationalism" that Furlong has also deliberated on, the article by Charl Blignaut on the Ossewa-Brandwag's (Oxwagon Sentinel's) social policy of the "nation's" care serves as a typical example thereof. Blignaut's emphasis, however, is more of an argument concerning the distribution of labour according to the norms of gender. Paul Thompson's informative narrative "Wipe out the Vons!", The Pietermaritzburg Citizens Vigilance Committee and the sinking of the Lusitania in May 1915 provide insight into British nationalism and loyalty against possible German disloyalty in the erstwhile Natal province in South Africa during the First World War.

The second apparent thread is the transregional impact of some economic initiatives by international investors like the Edgars Group in South Africa. The value of outstanding intrapreneurial leadership is the focus of Hanlie dos Santos in Intrapreneurship: George Beeton's managerial contribution to the Edgars Group, 1963-1996. Beaton's experiences on the East Rand and in the Eastern Cape (Port Elizabeth) before his appointment as Chief Executive of the Edgars Group, 1990-1996, form a major part of the discussion. Polly Mashigo, in turn, emphasises the history and economics of Informal finance for survivalist enterprise development in the Soshanguve Township of the Gauteng Province.

Research activity in demarcated regions, as solidly argued by Sulevi Riukulehto in Various directions in Regional History, has taken a new turn. Apart from the view that national states are not regarded as having any special role in research work, regions are interpreted as being evolutionary processes. Also, time and space (history and region) are interconnected in research questions. Similarly, Riukulehto regards borders and the roles of minorities and otherness as current popular research topics that a global world has a need for: A regional history that exceeds the national level of historiography is regarded as the ultimate ideal. Lastly, Riukulehto states that studying regions does not necessarily include a study of nations or their administrative subdivisions. One can indeed go along with these observations and concur with Riukulehto's last remark, yet with a BUT next to it. Demarcated regions have come to stay and though regional historians should embrace the different possibilities of approaching research on and in regions from especially a time and space paradigm where man-made borders do not necessarily provide a sufficient perspective of past human developments, reality must also be considered. Reality entails that funding and permission for cross-border studies may be less accessible, but definitely doable and a must; and likewise that the merits of studying regions in their demarcated state will not be regarded as being of lesser value in a process of knowledge dissemination. It is exciting to take cognisance of the various research directions to be found within research conducted in different regions. A variety of activities of the past decade or so has brought about more progress towards an understanding of the epistemology regarding regional history studies. An outflow of the above gave rise to a first regional history symposium for South Africa that was held on 27 November 2015. It was possible to report timely on this event even before the distribution of the December 2015 New Contree.

Please do not forget to renew your membership. If you are new to the Journal, please complete the subscription form at the back of the Journal and return it with proof of your payment. Alternatively, you can ask the New Contree Administrative Support (see front pages for details) for an invoice and it will be followed up.